In the winter of 1974 and after a successfull season with the Seeley Konig, Dave and Allen thought that they would design their own bespoke frame for the Konig engine. The frame was constructed from a 4 inch spine main frame, with a small diameter tubed subframe to support the seat unit running horizontally towards the front of the frame to link up with the radiator support mounts. The main frame was 5 inches longer in front of the steering head which was where you accessed the fuel filler as the spine frame acted as the fuel tank as well as the chassis. (This was later a significant design advantage in European Grand Prix endurance racing).

All machine work and milling was carried out by Allen, fabrication and gas flux weldingof the frames was carried out by Dave. It used the same gearbox and clutch assembly as the Seeley Konig, Seeley forks and yokes, custom made clip ons, a De Carbon rear mono shock was fitted to the bespoke made swingarm. The engine was mounted very low to a lightweight alumium belly pan that also house the ignition system and coils.

Two complete bikes where made from scratch in the space of 6 weeks!! Dave and Allen still can’t believe what they achieved only working evenings and weekends. 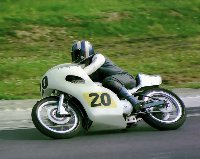 With two complete machines, one housing a 500cc engine, the other with a 680cc engine and the later with a large longer range conventional fuel tank, they believed that they had the equipment and potential to be competitive within the Grand Prix scene. Early testing proved hard work as both bikes were work in progress, but with persistence both bikes were becoming reliable and race winning Grand Prix machines.

It was at this point that life outside of racing had intervened, the previous years of constantly working long into the night, loosing your job due to playing sick and going testing and the spiralling costs that they just could not keep up with meant that during the 1975 season Dave and Allen gave up racing. Both Daval’s were sold, one two Quaife Engineering and the other to Bob Steele which later became the successful Rutherford Konig. (I wonder where they are now)?

Both Dave and Allen only now realise what they achieved in a short amount of time and can’t help thinking what may have been?